REA Views on the BMJ Article by Dr. E. Cardis at IARC and co-authors（detailed version）（2005/07）

Dr. E. Cardis at International Agency for Research on Cancer (IARC), Lyon, and co-authors have recently published epidemiological (analytical) results on the potential effects of external radiation exposure on cohorts of workers in the nuclear industry in 15 countries(Table 1). This short report, entitled “Risk of cancer after low doses of ionizing radiation: retrospective cohort study in 15 countries” has been published in the British Medical Journal (BMJ). In this study, data/information submitted from Japan were included only in analyses of leukaemia. Data on the atomic bomb survivors in Hiroshima and Nagasaki were recalculated for comparison with the results of these analyses.

1. Major Results and Conclusions of the IARC Article 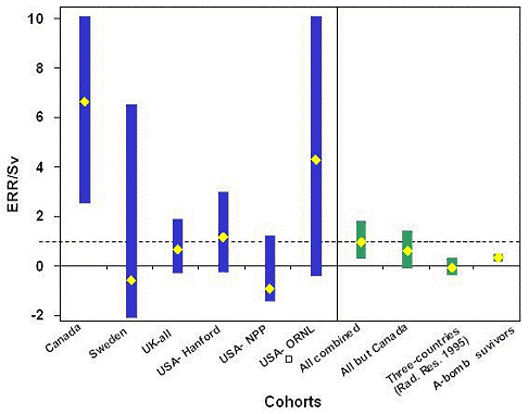 Supplementary Figure 1: Excess relative risk per Sv for all cancers excluding leukaemia with more than 100 deaths


(3) On the basis of the above results, the estimated ERRs obtained in this study were higher than, but statistically compatible and consistent with, the risk estimates used for the bases of the current radiation protection standards. They concluded that “1-2% of deaths from cancer among workers in this cohort may be attributable to radiation,” and that these results suggest that “there is a small excess risk of cancer, even at the low doses and dose rates typically received by nuclear workers in this study.”


2. REA Views on the IARC Results and Conclusions in the BMJ Article

REA, on the basis of the following observations, deems these results and conclusions premature, and believes that one should not make a hasty judgment or interpretation that evident health effects by low-dose radiation have been found.


(1) Decrease in statistical power
The 15 country study, though based on the largest cohort ever examined, [much larger than the 3-country research (table 1)], showed decreased statistical power (i.e., wider range of confidence intervals) contrary to general expectations (table 2). This is likely to be due to the fact that nearly 60,000 workers with internal contamination or neutron exposures were excluded, though they have received relatively high doses.

Table 2: Estimated excess relative risks per Sv(95% confidence interval) for all cancers excluding leukaemia, solid cancers, and leukaemia excluding CLL for nuclear workers and survivors of A bomb in Japan

The research, though analyzing the largest cohort ever studied, produced no statistically significant estimated risks for leukaemia excluding CLL, in contrast to the results of the 3-country research and data from atomic bomb survivors


(3) Lack of data on confounding factors

We can not draw definitive conclusions with respect to the potential confounding effect of lifestyle-related factors such as smoking, because of lack of relevant information in most of the participating cohorts. The IARC article only stated, based on analyses of causes of cancer deaths related or unrelated to smoking, that confounding by smoking “is unlikely to explain all of this increased risk.”

However, a study conducted by REA on a Japanese population indicated that cigarette smoking and alcohol consumption both increased in parallel with the cumulative doses, strongly suggesting the possibility of confounding effects (for further details, see this report.).


(4) Differences in risks between cohorts

The IARC article states that “no evidence for differences in risk between…, cohorts,…” was evident. However, analyses excluding one country (or cohort) at a time produced ERR per Sv of 0.58 (95%CI: -0.22 to 1.55), which was no longer significantly different from zero, only when Canada was excluded. It is possible that the data from Canada, which were particularly in the higher range, have affected and shifted the overall results.

Although the present multi-national joint research undertook a multitude of analyses under varying conditions, it only made public the results of the analysis exclusively based on one set of conditions from which the conclusions were drawn. According to common practice, such studies should draw conclusions by comparing the results obtained under differing analytical conditions, and these results should also be disclosed for review by experts. It is indeed regrettable that the article has been published in such a way that the public has little accessibility to more detailed information of the study.

In order to demonstrate that cancers were caused by irradiation, it is not sufficient to merely establish a quantitative relationship (statistical significance) between the cancer risks and the cumulative doses, but it is also necessary to consider other factors described below, in particular, from 2) on to determine the cause-effect relationship:


1) Strength of data relationships
The data need to have sufficient inter-relatedness.
2) Specificity of data relationships
Certain diseases are preceded by certain exposures, and the exposures cause the occurrence of the diseases at
a predictable rate.
3) Data consistency
Events observed in a particular population are also observable in other similar populations.
4) Chronological transition of data
Exposure is demonstrated to have occurred prior to the onset of the disease.
5) Data coherence
Epidemiological observations are coherent with the results obtained by investigations including animal
experiments and instrumental analyses.
6) Data probability
Epidemiological observations are compatible with, or relevant to, existing biological knowledge/theories.
7) Dose-response relationships
The higher the cumulative doses are, either the higher or the lower the cancer risks will be.
(quoted from Japan Epidemiological Association. Epidemiology- Study from the basics. Nankodo Co. Ltd.)


The present IARC article provides, in comparison with other similar research on low-dose irradiation, an insufficient amount of data for determining the above-mentioned causal relationships.

Appropriate consideration of the effects exerted on the results by the socioeconomic status (SES) indices reportedly used for stratification of the data is required. One study conducted in the US reported that the SES counted for at most approximately 3% of the overall cancer risk, which is one-tenth of the risk of cigarette smoking or adult diet/obesity, respectively; the significance of SES has been reported as fairly low(Supplementary Figure 2).

Supplementary Figure 2: Causes of cancer in the United States

Cohorts of workers excluded from the analyses of all cancers for whom socioeconomic information was unavailable or incomplete included approximately some 100,000 workers from Japan, Idaho National Engineering Laboratory (INEL), and Ontario Hydro Canada, leaving some 200,000 workers suitable for the analyses. The results of analyses incorporating these three excluded cohorts should be disclosed as well, since SES is unlikely to cause a significant difference to the mortality rates.

The present IARC article contains no figure/table illustrating the relationship between the cumulative doses received and ERRs. Therefore, we cannot exclude the possibility that the published results of ERR per Sv had been largely influenced by exceptionally high values accidentally obtained only in a certain dose area, which caused the linear gradient to increase.